The History of Bathing: A Brief About Origin of Bath 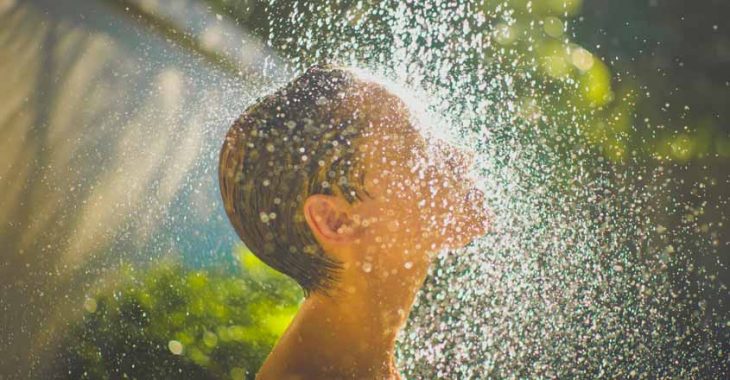 Think your little brother smells bad if he skips taking a shower for a day?

Consider this: at least he bathes more than once a year, doesn’t have lice or fleas, and doesn’t wipe his bum with a communal sponge.

Today may possibly be the most hygienic period in human history. Here are a few unclean habits our ancestors had and the dirtiest time periods in the history of human existence.

The History Outline of Bathing from Ancient Times

In Rome, public toilets were common. But they weren’t like today’s modern toilets, with stalls for privacy.

Most Roman toilets were long planks with holes cut out, opening into a storage tank.

People sat next to one another to urinate and defecate, and historical records indicate they were social locations where people would go to mingle while doing their business.

Instead of toilet paper, the public baths were outfitted with communal sponges that everybody used to clean up.

In addition, urine was a cleanser, and public urns were set up in cities where people were encouraged to relieve themselves so the urine could be collected for the commercial cleaners.

Bathing Style in The Renaissance

During the Renaissance and Regency eras, it was popular for both men and ladies of the upper classes to have pale skin.

To achieve this, many people used white makeup made from lead and mercury. While often the manufacturers claimed it was good for the skin, the makeup could cause sores and skin disease. In addition, during some parts of these eras elaborate wigs and upswept hairstyles were in fashion, the bigger the better.

Hairdressers often powdered hair and wigs. To achieve an upswept look, some hairdressers arranged the hair over a cushion placed to give it height.

Then they would add feathers and other decorations with wax; sometimes they would simply cut the feathers out at the end of the day instead of washing them out.

Some ladies with these complicated hairstyles would wear them for days or weeks without washing.

Bathing Style in The Medieval era

During Medieval times, bathing was looked upon with mistrust. It was seen as sensual and done mostly by people who were given to sexual debauchery; many believed that bathing allowed the devil to enter one’s body.

When it came to health, many medical authorities of the time claimed that letting water touch you, especially during colder months, could cause serious illness.

Most castles had rushes on the floor instead of rugs; people would throw scraps of leftover meat and bones into the rushes after meals and sometimes urinate in them as well.

The rushes in medieval castles got dirty very quickly and had to be changed regularly.

Thousands of years ago, before people settled in cities and began to feed themselves through agriculture, cleanliness was not a priority and baths and showers were non existent.

It’s likely that primitive peoples had no way of washing their hair dreadlocks were probably common and with no soaps or scents, people were probably used to the smells of unwashed bodies.

In addition, leftover carcasses and bones from meals were often disposed of in the same caves where people lived so people’s homes must have been fragrant.

Bathing Style in The Victorian era

Victorian London was full of cesspits-large tanks where sewage from each house was collected and cleaned out regularly.

The tanks were often located beneath people’s houses or behind them in open pools.

The pits weren’t well insulated and often leaked into basements and ground floors, and the contents of the cesspits were sometimes carried through people’s houses when they were cleaned out.

People who didn’t have cesspits used chamber pots to go to the bathroom, and they regularly emptied the pots by throwing the contents out the window. It was considered a fairly normal occurrence to have the contents of a chamber pot land on one’s head while out walking or shopping.

During the beginning of the American colonial period, settlements were small and precarious and they struggled for survival.

Colonists were often unprepared for the harsh conditions of the new continent and the hostile welcome from the natives. In such tough environments, cleanliness was not a priority.

Colonial Jamestown, an important early American settlement, was built in an island surrounded by swamplands.

The settlers originally planned to trade with natives for fresh water and food, but the natives were hostile and not always willing to trade. So the colonists were forced to drink brackish water from the swamp, which made many of the people extremely sick.

Dysentery is a messy disease involving explosive diarrhea and vomiting and it’s likely that Jamestown was not a particularly clean place when most of its inhabitants came down with it.

Around the same time, Jamestown entered a period of famine so most people were dying of either dysentery or hunger.

With all the diarrhea, vomiting and dying going around in Jamestown, chances are the town and its inhabitants didn’t smell very good.

Bathing Style in The Ancient Egyptians

The Ancient Egyptians shaved their heads so they wouldn’t get lice-then wore wigs to make it look like they still had hair.

But just because they had shaved heads didn’t mean they were clean. They put wax cones filled with perfume on top of their wigs, and as the wax melted during the day, they were always surrounded by sweet smells.

Of course, their heads were also covered in wax by the end of the day.