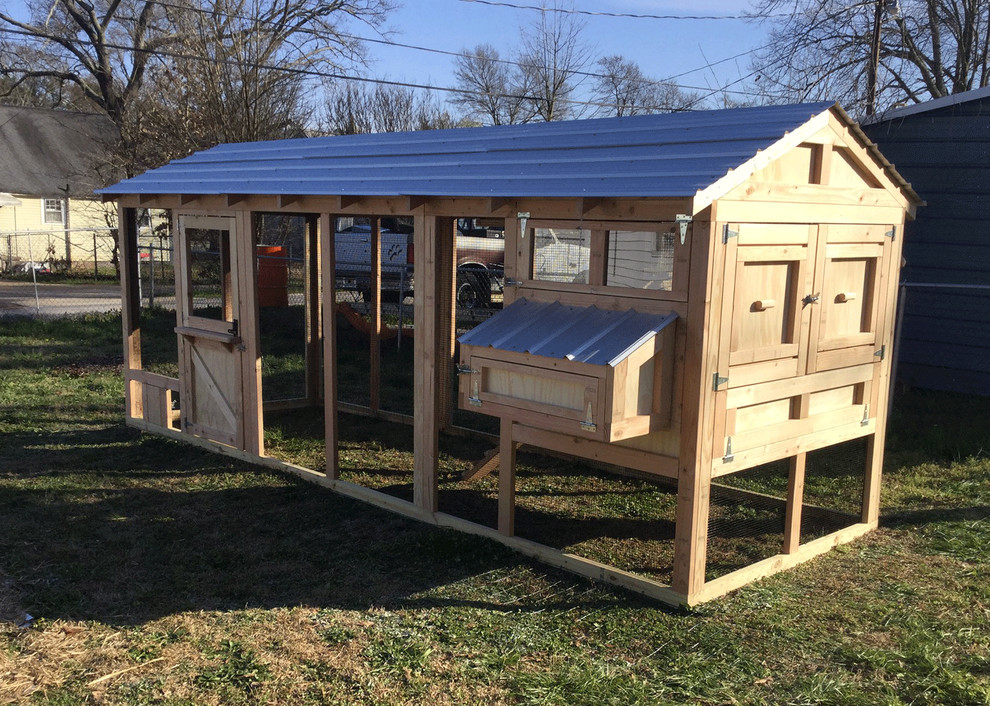 I grew up living next door to my grand parents who had a small farm and chickens were always there. All my cousins and I learned how to gather the eggs, feed the chickens and how to incubate new chicks and so on Getting rid of the chickens after they stopped laying was another lesson learned but that’s for another story.

My wife started chatting with the lady who runs the Farm Plus store and you guessed it. home we went with four new Golden Comet hens at about seventeen weeks old. Of course we had no where to keep them coop wise so we quickly rigged a dogs cage with tarps in our garden for the night. We took a chance on predators but the cage is steel mesh and the garden is fully enclosed in heavy fencing as well.

I cautiously went out the following morning to see if we still had the chickens and sure enough they were there cackling away and unharmed. We decided that morning that our large shed was going to become a coop for what has become known as –the girls. Cleaning out the shed was the worst part but getting rid of things I haven’t used in years was a blessing. One good trip to the dump took care of all that could not be recycled. We now had an empty ten foot by twelve foot shed.

I went to the store and got a hundred foot roll of good mesh fencing and some post clips. I had a bunch of seven foot long, 1 1/2″ steel pipe I had salvaged from a destroyed party tent. Cost me zero, except my time. Using these and the new fencing we quickly made a rather large area for the chickens to roam unattended for the most part. A small bucket for water and a large roaster pan for feed and the chickens were good to go. As most of the fenced area is under some trees I was not worried about air borne attacks. During the day when the fence gate is open, our two cats and one dog are there so that also deters other animals from entering the area as well.

We decided after much thought and sample layouts to divide the shed in half using half for the coop and the other half for a walk mower, hay storage and the like. The wife and I also decided to try and scrounge as much as possible of the materials we would need from our three storage sheds and car garage. Amazingly I purchased only two, two by fours at the very end to frame a window opening. Once we had the layout where we wanted it, the first thing was to install a top and bottom sill plate on the floor and ceiling.

A thirty inch wide door location was picked and framed as well. Using three inch galvanized wood screws, all framing was secured to the framing of the shed. I used twenty-four inch centers on the studs as there were no structural studs required. While digging through all my materials I found a bunch of twelve wide plywood rips that made perfect sheathing half way up the interior walls.

Be tough for a fox or raccoon to eat through that in one night if they could even gain access to the shed at all. I then completed the interior walls with a heavy gauge chicken wire mesh attached with one inch fence staples. Being careful not to leave any sharp ends for the chickens to get into or for someone to cut themselves on, every inch of the interior walls right up hard to the roof is covered with the wire mesh.

To intruder proof the door, I installed a regular dead bolt from the door into the floor and a hook and eye with an animal lock above it. To create one is very simple. After installing your hook and eye, which an animal like a raccoon might lift and unlock, take a small piece of three quarter inch thick wood about one inch wide by four inches long (again use more scrap) and drill a small 1/8″ hole near one of the short ends. Screw this wood piece to the door jamb just above the hook and eye in a vertical position so that you have to pull the wood block towards you rotating it on the screw and then lift the hook and eye. Simple but almost impossible to open without human hands.

We now moved on to making the nesting boxes, roost and so on. The nesting boxes I made from scrap lumber, measured nine inches high, by twelve inches wide and deep. A single strip of one by three across the front for a perch and a lid and the boxes were done. I fastened the lid with a continuous piano hinge for ease of access to the nest for cleaning, gathering eggs and so on.

I sloped the sides of boxes one inch forward slightly to avoid having the chickens sit on top of the boxes but I would make them steeper next time as occasionally we have one chicken who likes to sit there and do her business. We installed a roost fifty four inches above the floor as that placed it higher than the nesting boxes and well away from food and water areas. Chickens at night will roost and defecate when they sleep.

The roost was simply a two by four with the top narrow side edges rounded off with my router. The chickens love it now. The first morning after installing it, I opened the shed doors and there were no chickens to be seen on the roost or on the floor or in the nesting boxes. The chickens had found a two by four on the flat over the door only thirty inches long and had managed to squeeze all four of them onto the tiny shelf. Why? It was the highest ledge in the coop. I installed a plywood cover and they moved right over the roost as it was the nest highest thing to sit on.

I installed a guillotine style door with a couple of holes drilled in the rafters and plates to allow a rope to pass through.Ending the rope at the entrance door I can open and close the chicken door without entering the coop area itself. Handy if you have good shoes on at the time. I happened to have a piece of old Formica countertop that I could cut the door out of and using an edge piece, it is fairly weather proof on the outside and edges. Slides up and down without any lubrication at all.

We took a break at this point for a few days to see what problems we would have if any. The chickens constantly turned over their feed dish in the coop so that was cured with a wall mounted feeder. Their water dish was placed on some bricks to elevate it and so far they do not spill the dish at all. We buy the largest roaster pans at the dollar store that they sell and place a couple under the roost. You will be amazed at how much cleaning up it saves. Once a week to empty the pans, replace some straw and it is food to go again.

I had a used aluminum insulated sliding window about two foot by three foot in size. I added that that to the coop a few weeks later to provide some nightly fresh air. By installing a 1/4 inch by1/4 inch heavy steel hardware cloth with screws and washers over the window exterior, nothing is going through that as well..The Girls are much happier it seems.

The grand kids love their chickens and of course have named them all. They feed them every morning, gather the extra large brown eggs.and then talk to them a while. The chickens go nowhere when let out of the fenced area but it is protection for them when we are not outside working.

It was well worth the thirty dollar cost for the chickens and we spent another $55 on a dead bolt, wire and so on. All the droppings and old straw are going into the garden compost pile and next year we will have free compost as well. The eggs of course are just the icing on the cake!