Most Scenic Areas in Alberta

Located in western Canada, Alberta is renowned for its stunning and diverse scenery that includes everything from prairies to surreal blue lakes, magnificent waterfalls, glaciers and the towering peaks of the Rocky Mountains. With so much to marvel at in this province, it’s hard to choose the most scenic areas, but these destinations are certainly hard to beat.

Banff National Park itself is considered one of the most breathtaking places to visit in all of Canada, but within its boundaries, Moraine Lake is frequently named among the world’s most beautiful lakes. Absolutely surreal, every year in early summer as the water levels rise, rock particles in its glacial waters cast an extraordinary brilliant shade of turquoise. Along the shoreline, you’ll often see deer feeding on the grass, along with the occasional bear. The scene is truly unforgettable.

St. Albert, located just a 30-minute drive northwest of Edmonton, lies along the Sturgeon river bed and is one of the most picturesque cities in the province. One look and you’re likely to start searching through the St. Albert homes for sale. It boasts a number of natural areas interspersed along scenic hiking trails that meander through, and it’s home to the capital region’s only provincial park. Lois Hole Centennial Provincial Park is renowned for bird watching with diverse, abundant populations, especially shorebirds and waterfowls thanks to its large lake.

The Canadian Badlands cover 35,000 square miles and are filled with otherworldly-like rock formations known as hoodoos along with rugged canyons, mesas, ravines and endless fields of grass. A sight to behold and a photographer’s dream, a one-hour hike on the Seven Wonders of the Badlands is a great way to learn more about its geology, archaeology, and fossils.

Alberta is a major producer of wheat, barley, and canola, and during the summer season, you’ll see high crops that appear as if they’re glowing under the rays of the sun creating a kaleidoscope of color across the landscape. It’s a striking contrast against the nearly always bright blue sky. If you hop on any highway east of Calgary in the summer, with the peak time from mid-July through early August, you’ll be in for a treat.

One of the top road trips you can take in all of Canada, the Icefields Parkway spans 142 miles, tracing the Continental Divide between Banff and Jasper national parks. The scenery is some of the planet’s most fantastical, with stunning alpine lakes, iconic mountains, waterfalls, glaciers, and wildlife. Along the way, you’ll be able to witness the Athabasca Glacier, the largest of the six “toes” that make up the Columbia Icefield. While it once covered the Canadian Rockies, it’s been reduced by more than half its volume during the last 125 years, so you’ll want to experience it sooner rather than later as it’s disappearing quickly. One of the best ways to witness it is to join a guided walk onto the icefield or hop on the six-wheeled all-terrain vehicle that will bring you out onto the accessible tongue of ice.

Major Landscaping Mistakes That Do Damage to Your Home 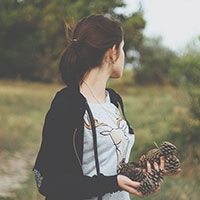 Hi, I'm Shiyamala. I like the smell of coffee in the morning. I live to break stereotypes and empower you to take on your own DIY home improvement projects.