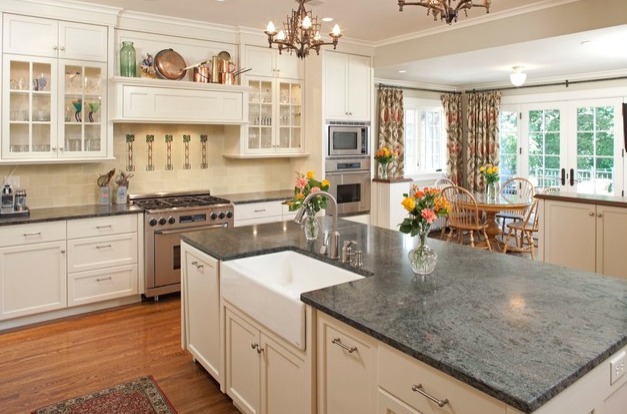 Like hamburgers, jazz, and baseball, the ranch house plan is a unique American art form.

Based upon the casual, open style of homes on working western American ranches, low slung ranch homes began to be constructed in the 1930’s and for the next forty years they popped up like mushrooms all over the American landscape.

In the 1980’s and 1990’s the popularity of ranch style homes declined but today ranch style homes are returning to vogue, often as custom built homes (as opposed to the suburban tract-style homes commonly built in the post-World War II era).

Ranch style homes are associated with laid back living. They put the emphasis on family-friendly backyards, often connected to flat patios, and then with sliding doors to the kitchen or dining areas.

Besides serving as the connection between outdoor and interior living spaces, sliding glass doors also let in as much view and light as possible.

Considered in the context of American architectural styles, the ranch home style emphasizes a private backyard devoted to family activities (with patios leading to garden or recreational areas).

This is quite different from traditional American architecture with its emphasis on the public front porch, which faces the street and is designed to impress.

The prominence of the garage in ranch house floor plans is indicative of the automobile-centric lifestyle of post-war suburban America.

So ranch style houses tended to have a linear flow, which stemmed from the garage.

The ranch house style implies single floor living, so the houses have a low profile.

This stems from the original model of practical, unadorned working ranch houses typical of the Western United States.

Also, rather than having rectangular floor plans, ranch style homes were often shaped like “U”s or “L”‘s.

The distinguishing feature of the ranch house style is open space, with a connection between outdoor and indoor living.

This architectural style was pioneered by Cliff May, a California architect, who designed houses which were frequently one room deep, so that every room would open up to the outside and receive sunshine and the warm breeze.

Critics of the ranch style believe that the sprawling floor space gobbles land and resources.

Another problem with ranch style homes is that rainwater can collect on poorly-drained or almost flat roofs, and leak as the home ages.

Ranch houses were designed with the relative balmy and dry climate of the western United States in mind, and in areas with severe winters they can be expensive to heat.

However, this didn’t stop millions of ranch houses from being mass produced all across the country.

With the resurgence of interest in ranch house floor plans, you can find a ranch house plan to fit your needs and keep within your budget.