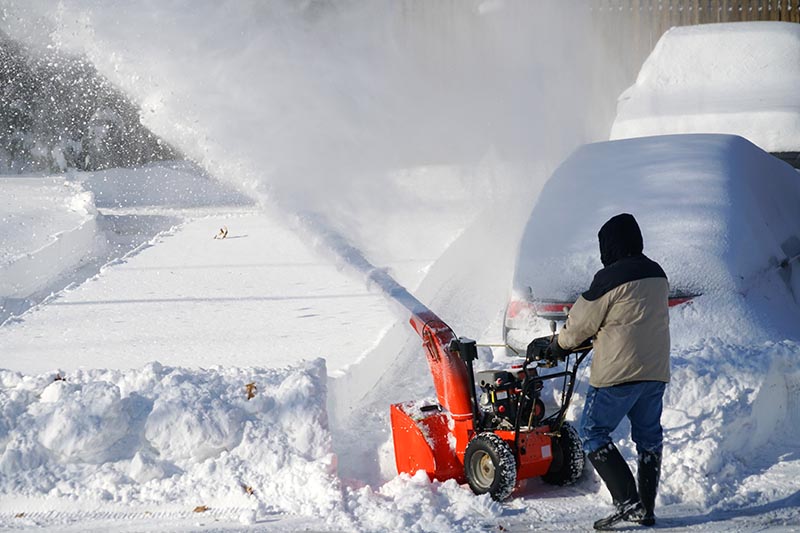 Snow season is here and it’s time to be prepared for clearing driveways and shoveling out cars and taking care of your sidewalks.

Maybe this year you’ve decided its time to get a snow blower to make the job a bit easier.

Or, maybe it’s time to upgrade from the older one you’ve been using the past several years. Either way, there are LOTS of snow blowers out there.

Which ones are the best and how do you choose?

I’m getting a snow blower this year, and I’d like to share with you what I’ve learned.

I use snow blower and snow thrower equivalently — there is no intended difference in meaning between the two phrases.

The first thing I needed to figure out is what the difference is between single-stage and two-stage snow blowers.

I kept thinking it had something to do with the engine and I just couldn’t figure out how a single-cycle motor worked. (Really? Yeah, really.)

It made so much more sense once I realized that the difference was in how they moved snow.

A single-stage snow blower relies on the action of the auger to blow the snow.

The auger is the nasty, cork-screw shaped blade mechanism in the front of the snow thrower.

The auger on the single-stage blowers may be metal, metal tipped with rubber, or even completely made of rubber.

So, then, what’s a two-stage snow blower?

This adds an additional mechanism in the back of the snow thrower called an impeller. This is designed to suck up the snow delivered by the augers and chuck it out the chute.

The result is gearing that trades torque for speed.

Consequently, single-stage blowers perform best on dry snow. Two-stage blowers’ auger just needs to get the snow moved to the center impeller which is moving at seriously high speed.

It both breaks up the packed snow delivered to it from the auger and gets the snow moving up and out the discharge chute really well.

So, two-stage blowers will work well for both dry and wet snow.

There are several features you should consider before you buy. These include:

The complexity and user friendliness of snow blower controls can vary a great deal. Make sure you’re comfortable with being able to safely operate the snow thrower before you purchase it.

Gas-powered snow blowers will either have a pull start or an electric start. From what I can tell, this can cost $60-100 on your more cost effective snow throwers. More expensive two-stage snow blowers may just have this included and the price is harder to figure out. However, electric start does make starting the snow thrower on cold, windy days a much less daunting task.

Some higher end models may come with a built in light. This is convenient, but may not be as good as where a good head lamp on a head harness over your hat.

The chutes can be directed, and may have a control for the height (distance) of the discharge. They may be directly controlled with levers on the chute, or they may be remotely controlled from the back of the blower.

Big moves more snow, but may also be harder to turn. Make sure you’re comfortable with the height of the handle and your ability to turn it – they can be quite heavy.

NEVER STICK YOUR HAND INTO THE AUGER, THE IMPELLER, OR THE DISCHAGE CHUTE. I read someplace during my research that over 3000 people are injured every year by sticking their hands in the snow blower. If the snow thrower clogs up, TURN IT OFF, and then use the plastic paddle that came with the blower. Can’t find it or it didn’t have one? Use a broom stick — but don’t stick your hands in there.

Self-propelled snow blowers may have only one speed; others may have several. It’s nice to have a few speeds, but you really don’t need more than five.

I live in Colorado. Almost all my neighbors have snow blowers. I’ve bought snow throwers for family members who live in the mountains.

So, you might be surprised when I start this blog off asking you this simple question: Do you NEED a snow blower?

I ask because several of the snow throwers I’ve bought were used ones that either weren’t used or were too much for the original buyers’ needs.

So, I think it’s an important question to ask yourself before you buy. I want you to buy something that is going to bring you satisfaction and get used by YOU — I don’t want you to get something you’ll be selling at a garage sale in three years.

I think whether you need a snow blower comes down to a few very key things: how much snow do you get, what type of snow, how much sun you get, how often does it snow, how much real estate you have to clear, and what physical condition are you in.

According to the NOAA, Denver gets around 60″ of snow a year, usually fairly dry (we get only 15″ of precipitation a year). That’s five feet. However, the average snowfall per snowfall month is less than 13″.

Most of our storms are well under that much snow and we have sun shine 70% of the year. So, for me, a light duty snow thrower should be sufficient.

I think this is where physical condition comes in. Shoveling snow is definitely hard work. It could be considered aerobic if you stick with it.

However, is it good exercise?

Probably not the best. You are at a very unnatural position as you lift several pounds of snow. Over and over and over.

And then you are tossing it from that position, and sometimes even twisting at the same time. Maybe it’s not that good of exercise.

So, I guess the question of should you get a snow blower comes down to how many hours a year do you shovel snow at a rate that is safe for your physical condition.

This needs to be balanced against what you can afford and what value you put on your time and health.